Unmanned surface vessels continue to make in-roads into new applications and industries. An ability to gather data in otherwise inaccessible locations is both increasing knowledge about marine noise and confidence in marine autonomous systems in the oil and gas industry. Elaine Maslin reports.

Offshore oil and gas exploration and production activities have been going on since the mid-20th century. But the noise that drilling or production facilities emit into the marine environment and the impact they have on marine life isn’t perhaps as well quantified as it could be. That could be changing, thanks to efforts to persuade the industry to use unmanned systems.

Currently, there are efforts to monitoring marine noise, using passive acoustic monitoring (PAM) for marine life, but it’s mostly focused on seismic operations, which can emit a lot of noise into the ocean. Other efforts to measure and prevent noise in the marine environment include using the likes of bubble curtains around offshore wind monopiles while piling operations are ongoing. However, the day-to-day noise created by drilling operations is less well monitored. This is partly for good reason – there’s a 500 m exclusion zone around production facilities to prevent any unwanted interaction with other users of the sea. Where there is data, it tends to have limited sample locations and at distances of kilometres or tens of kilometres from a facility.

Some of the gaps in the knowledge about how much noise these facilities make are now being filled thanks to a project in the US Gulf of Mexico that made use of marine autonomous systems within the exclusion zone of a drilling facility, to enable a much broader understanding of the sound field. The study, commissioned by BP, for a sixth-generation mobile offshore drilling unit (MODU), was undertaken by UK-based underwater monitoring technology firm Seiche and its unmanned surface vessel (USV) business AutoNaut. Seiche thinks it’s the first sound field mapping within a 500 m exclusion zone. 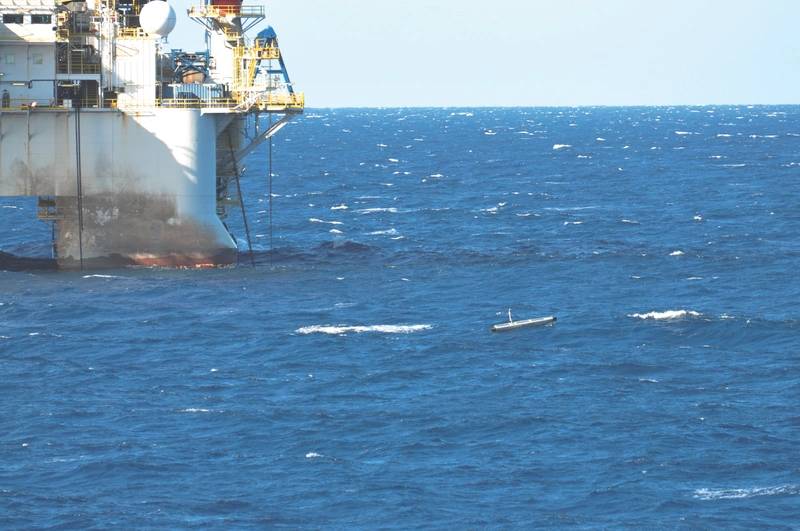 Operating up to 140m away from the MODU, within the exclusion zone. Image: AutoNaut

Mark Burnett, Seiche’s CEO, says the goal was to get rich data, instead of the sparse, discrete data that’s previously been gathered, due to the exclusion zone restrictions. But to do this, a number of different data acquisition platforms would be needed, he says, “and that simultaneous operations would be a big consideration, with the MODU and its support and survey vessels.” For this project, there was another rig to the northeast of the subject of study and a geophysical survey was also being undertaken to the northwest – on top of any passing marine traffic, such as fishing or cargo ships, that might be in the area – resulting in an estimated eight to 10 vessels regularly working in the sound field.
Drift buoys are usually used for this type of audio data collecting, says Burnett. They have a mast, battery, tracking system and a 60m-long cable with four hydrophones placed in pairs at 30m and 60m. But, drift buoys, by their nature, move with the swell and currents, which mean their data can be somewhat random. So, Seiche looked at other platform options.

“We dismissed aerial vehicles and also unmanned underwater vehicles as we wanted constant control and communication,” says Burnett. “So, we chose an unmanned surface vessel, which we would have command and control over via Wi-fi within the exclusion zone and an ability to set waypoints for navigation outside the zone. It would have a 10-20% cost saving over a survey vessel.”

There is an emerging use of unmanned vessels in the upstream industry. Last year, USV operator XOCEAN used its vehicles to perform hydrographic, pipeline inspection and data gathering services, while L3Harris has been trialling deploying a remotely operated vehicle from one of its USVs. But, despite the emerging use and apparent benefit of unmanned systems, it can still be an uphill struggle to get operators to adopt this technology. “Use of unmanned vehicles (surface/underwater) remains novel technology for the majority of clients, although acceptance and use for growing applications are starting to accelerate,” says Burnett.

For this project, the 5m-long AutoNaut system was chosen. The Islay AutoNaut was equipped with a 25m-long two-channel towed hydrophone array and a hull-mounted PAM. It had 1,800 m line of sight control, iridium communications and Wi-fi data access for wireless data transfer at sea. “It has quiet wave-foil propulsion to minimise contamination of the data, needs zero fuel because it harvests energy from waves to move forward and proven command and control,” says Burnett. It could be monitored and controlled using iridium communications and via local radio communications. It can also be launched and recovered from a standby vessel, making it easy to deploy and recover. In case it needs to move in an emergency, it also has auxiliary thrusters.

Nevertheless, prior to the mission, Seiche had to work with the operator to identify and agree proposed run-lines for the USV and anticipate drift patterns of the buoys (from predicted regional and localised surface currents). The close cooperation carried on through execution, including demonstrating the capabilities of autonomous line following, remote and local piloting and emergency response plans, says Burnett. Throughout, permissions had to be secured to do the work and full command and control capability of the USV had to be demonstrated. Seiche also had to get explicit permission from the respective offshore installation manager to go within the 500m exclusion/safety zone with the vehicle.

And, all went to plan. The mission was carried out in 2017, in 2000 m water depth over seven days. Data was collected over 41 hours at 1-5km from the MODU using five drift buoys equipped with 60 m vertical four-channel hydrophone arrays, while the AutoNaut Islay, operating for 75 hours, moved on transects at between 120m and 5.5km from the rig, recording at 25, 40 and 60m deep on its towed array. The project focused towards the east of the MODU, due to the ongoing seismic survey to the northwest, and each system had its own tracking systems monitored by situation awareness package from ION. In total, more than 117 hours of continuous valid data, including audio, GPS and AIS, was gathered. 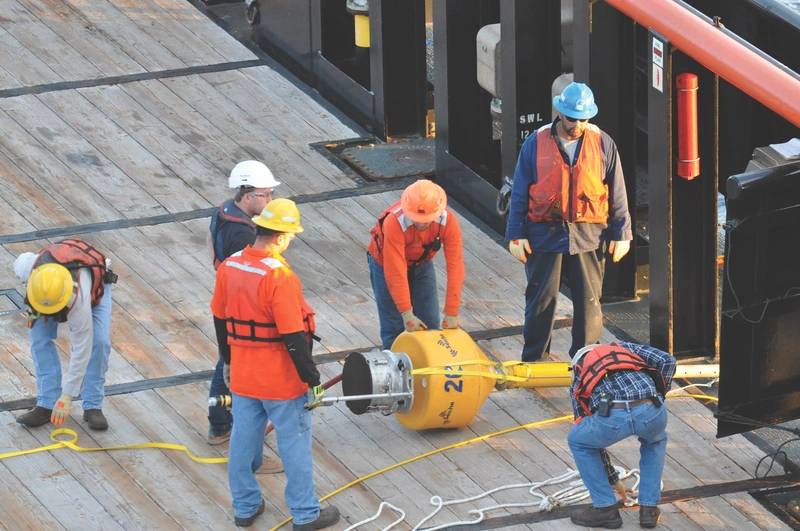 Handling a buoy from the standby vessel. Image: AutoNaut

“For operations of the AutoNaut outside the exclusion zone, lines were pre-determined with AutoNaut autonomously following; whilst remote pilots in the UK maintained a constant watch in the event of intervention, or direct pilot control required,” says Burnett. “During close passes within the exclusion zone, AutoNaut pilots situated on a nearby standby vessel took over the watch (remote piloting), whilst the AutoNaut autonomously followed the pre-plotted track lines. For this project, the standby vessel was used to deploy and recover the AutoNaut (and drift buoys) in proximity to the operating field, then stood off so as not to contaminate the acoustic data acquisition with its own vessel noise.”

Burnett says this type of project could also be done more efficiently in future, specially, removing the need for involving a standby vessel. “This was a requirement to mitigate potential risk of the AutoNaut losing command/control whilst operating in the exclusion zone. As a consequence, the standby vessel needed to have DP2 capability, and significantly increased the cost of the project,” he says. “Unmanned surface vessels should/are capable of operating from being launched from the shore and sailing out to areas of operations, rather than being carried out by support vessels.”
It's a technology that’s gaining traction. Since 2018, AutoNauts - there are now more than 10 of them, excluding early prototypes - have done more than a year at sea, cumulatively, including three missions that were each more than a month long, in the Atlantic and Pacific oceans. The longest mission to date has been 50 days in the mid-Pacific and one AutoNaut has operated in Force 10 on the Beaufort Scale, during the first Marine Autonomous Systems in Support of Marine Observations (MASSMO) mission, co-ordinated by the National Oceanography Centre and run off the Isle of Scilly and they regularly work in Force 6 and 7.
Projects the systems have worked on include science, civil, energy and defence for applications from fish tracking missions, anti-submarine warfare trials, metocean sensing and water quality monitoring to current profiling and as passive acoustic monitoring. More recently a combined science and research and development project has included deploying a Seaglider from an AutoNaut, to extend its range.
However, “use of unmanned vehicles (surface / underwater) remains novel technology, for the majority of clients, although acceptance and use for growing applications are starting to accelerate,” says Burnett, which means there’s still a need to work with clients to gain their confidence in the capabilities (and limitations) on the use of unmanned systems, through trials and demonstrations.

In this case, the MODU study “successfully characterised the sound field from a MODU during different operational phases in an environment that was challenging both operationally and acoustically,” says Burnett. “The combination of recording platforms provided a large and uniformly distributed dataset, with the USV proven as capable within the 500 m exclusion zone in order to gather novel data that helps to address a significant data gap for sound emissions from large semi submersibles. The value of unmanned systems is clear, through reducing the cost, HSE exposure and increase in value of data sets (quality and quantity). It just takes time and stakeholder engagement to displace existing ways of doing things and to be able to demonstrate that unmanned systems will add value and not be a nuisance that require additional overhead and management (this still needs work).” 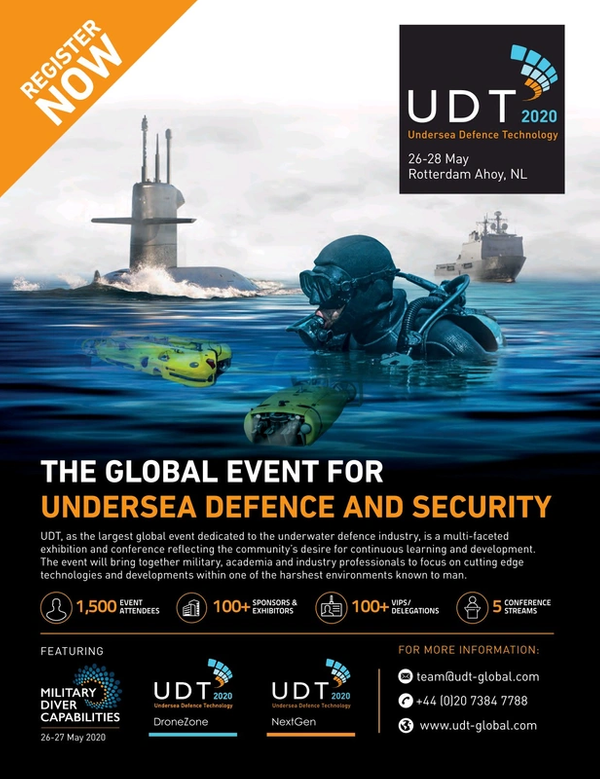 Other stories from March 2020 issue