At the beginning of 2015 the exhaust limit values for sulfur oxides (SOx) grew ever tighter in emission controlled areas. And with the start of 2016, nitrogen oxides (NOx) values in certain emission control areas (ECAs) will be even more restricted. Dual fuel engines such as the newly developed MaK M 46 DF from Caterpillar help to support the drive for cleaner emissions in the maritime sector. Able to alternate from gas to diesel mode during operation, the new engine range offers the flexibility to operate vessels reliably in all geographical areas, whether the fuel in use is gas, marine diesel oil (MDO) or heavy fuel (HFO). In gas mode, the M 46 DF features industry-leading fuel consumption and will comply with IMO Tier III as well as EPA Tier 4 regulations.

The M 46 DF
The new M 46 DF range will expand the Caterpillar Marine’s market to large vessels such as ferries, cruise ships, tankers, offshore vessels, dredgers, large tugboats that will be particularly affected by new edicts in designated ECAs. The design enables shipowners to satisfy future, tougher emissions legislations without having to fit exhaust after-treatment plants.
As Hartmut Bartel, head of New Product Introduction at Caterpillar Motoren GmbH, Kiel, explained: “This M 46 DF engine is designed on the basis of our very successful M 43 C medium speed engine, with the aim to meet and exceed the M 43 C reliability and life-time expectations, while maintaining its class leading position regarding operational efficiency and durability. Applying the same design philosophies, the M 46 DF will share the same footprint with the M 43 C providing the opportunity to retrofit M 43 C engines, which we already have proved on a LNG carrier in a single main propulsion application in last year.”
The M 46 DF combines a conventional Diesel with a pilot injection gas engine and is available as six, seven, eight and nine cylinder inline as well as 12 and 16 cyIinder V-configuration. With a bore and stroke of 460 mm x 610 mm (displacement of 101.3 l per cylinder), the M 46 DF will be set to deliver 900 kW/cylinder at 500/514 rpm (5,400 to 14,400 kW) with a bmep of only 21.3/20.7 bar, ensuring that the traditional reliability and robustness of MaK Marine engines is maintained.
The M 46 DF is a turbocharged, charge air-cooled, non-reversible four-stroke dual fuel engine which can be operated in two different modes:
* In conventional diesel mode, in which diesel (MDO) or heavy fuel (HFO) can be burned.
* In gas mode, in which natural gas can be burned. This includes natural gas (NG) and liquefied natural gas (LNG).
The engine can be changed at any time between gas and diesel operation. Gas operation can be provided down to 20% low-load conditions. IMO Tier II exhaust limit values are achieved in diesel operation with a conventional PLN injection system. The new engine has a so called cylinder selective gas injection and features also a Common-Rail-Ignition Fuel oil system for gas operation. Required efficiencies at the same time fulfilling IMO Tier III NOx limit values are achieved under two percent ignition oil amounts. With this the advantages of a very fast charging pressure control is achieved by using a blow-off valve. The system has been designed in such a way that in gas mode a load range of 20 to 100% can be achieved.

Emission Reduction
By using natural gas fuel in marine engines pollutant emissions can be significantly reduced. Sulfur dioxide, soot and nitrogen oxide emissions, all fuel-related, are very low as compared to diesel engines. Despite the reduction of the pollutant emissions, the M 46 DF achieves in gas mode efficiency levels (50%) which are comparable with a diesel engine (M 43 C).
The development of the M 46 DF was started as the answer to the upcoming exhaust emission limit values in the ECAs. These nitrogen and sulfur dioxide emission limit values can be achieved with a dual fuel engine in gas mode completely by means of measures taken inside the engine. By combining both the combustion processes completely new operation possibilities can be achieved in comparison with an Otto-Gas-Engine (spark plug ignition). One example is the improved transient performance in gas mode. With the aid of the diesel injection system an engine speed control stability at rapid load requirements can be achieved – which is not possible with pure gas engines. Caterpillar in-house-developed electronic control system can also react immediately on gas quality fluctuations or on an unsteady gas supply. Hence the dual fuel engines are also very interesting for the oil industry.

Flexible Camshaft Technology
The FCT system (Flexible Camshaft Technology) to switch the engine valve timing is also used on the M 46 DF. It allows in diesel as well as in gas mode load dependent optimized valve timing. Beside others this is the basis for knock-free operation over the entire load range – especially with high mean effective pressures. The attached drawing shows impressive the effect. Here you can see the knocking and misfiring limits of the M 46 DF. The operation range knocking combustion and beginning misfiring can be extended in gas mode by the FCT system. The FCT system supports in diesel mode the optimal air supply and therefore an efficiency optimized and smoke reduced low load operation.
The new M 46 DF dual fuel engine - which is assembled at Caterpillar’s facility in Rostock, Germany - designed with an ignition oil system for very low diesel fuel consumption is an alternative in regard to pure diesel engines as well as also to pure Otto-Gas-Engines. The efficiency of the dual fuel engine in gas mode can be further optimized under compliance of IMO Tier II NOx limit values. The further stringent reduction of emission pollutants are the driver of alternative fuels. A dual fuel engine will maintain its position in the market because of regional different mandatory exhaust levels and fuel price differences. The lower emission level of the DF-engine compared to a diesel engine and a higher operating safety as compared to Otto-Gas-Engines makes him the ship propulsion of the future.

(As published in the May 2015 edition of Maritime Reporter & Engineering News - http://magazines.marinelink.com/Magazines/MaritimeReporter) 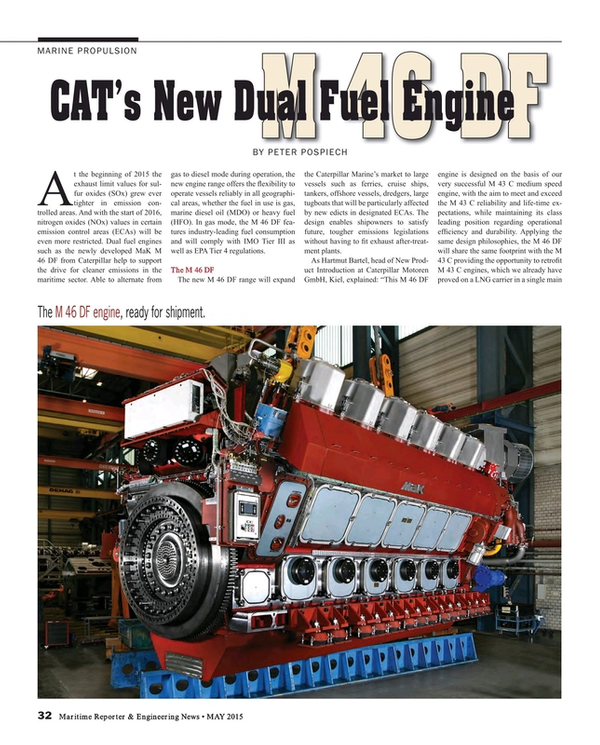 Other stories from May 2015 issue