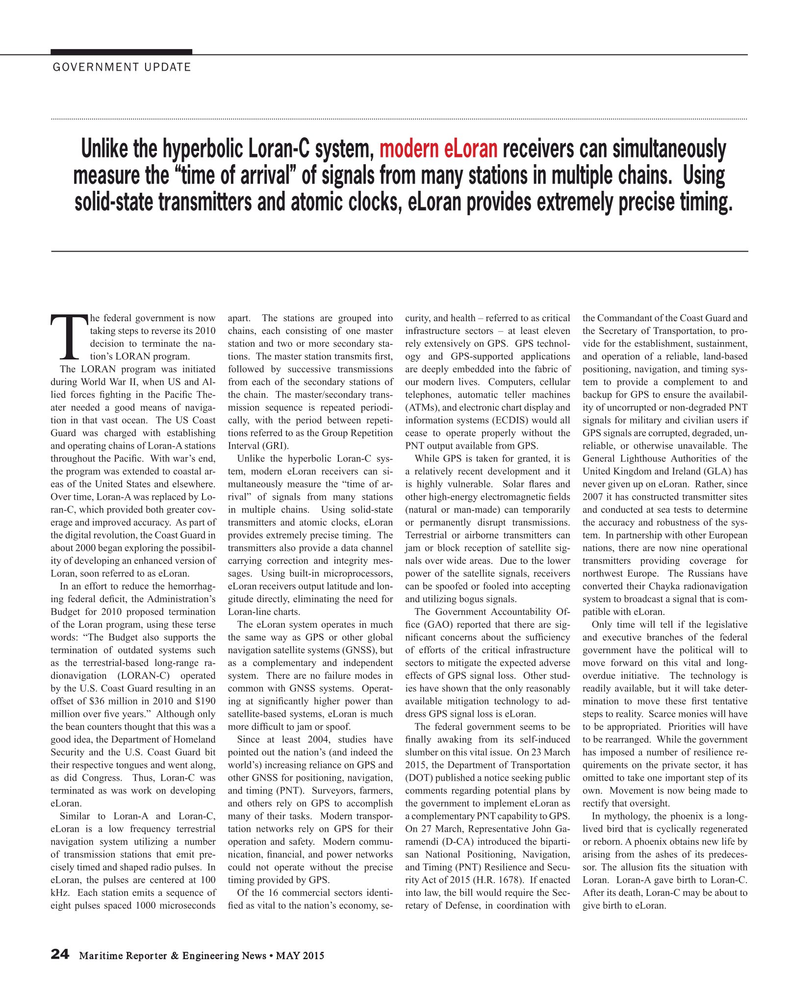 Unlike the hyperbolic Loran-C system, modern eLoran receivers can simultaneously measure the “time of arrival” of signals from many stations in multiple chains. Using solid-state transmitters and atomic clocks, eLoran provides extremely precise timing. he federal government is now apart. The stations are grouped into curity, and health – referred to as critical the Commandant of the Coast Guard and taking steps to reverse its 2010 chains, each consisting of one master infrastructure sectors – at least eleven the Secretary of Transportation, to pro- decision to terminate the na- station and two or more secondary sta- rely extensively on GPS. GPS technol- vide for the establishment, sustainment,

The LORAN program was initiated followed by successive transmissions are deeply embedded into the fabric of positioning, navigation, and timing sys- during World War II, when US and Al- from each of the secondary stations of our modern lives. Computers, cellular tem to provide a complement to and lied forces ? ghting in the Paci? c The- the chain. The master/secondary trans- telephones, automatic teller machines backup for GPS to ensure the availabil- ater needed a good means of naviga- mission sequence is repeated periodi- (ATMs), and electronic chart display and ity of uncorrupted or non-degraded PNT tion in that vast ocean. The US Coast cally, with the period between repeti- information systems (ECDIS) would all signals for military and civilian users if

Guard was charged with establishing tions referred to as the Group Repetition cease to operate properly without the GPS signals are corrupted, degraded, un- and operating chains of Loran-A stations Interval (GRI). PNT output available from GPS. reliable, or otherwise unavailable. The throughout the Paci? c. With war’s end, Unlike the hyperbolic Loran-C sys- While GPS is taken for granted, it is General Lighthouse Authorities of the the program was extended to coastal ar- tem, modern eLoran receivers can si- a relatively recent development and it United Kingdom and Ireland (GLA) has eas of the United States and elsewhere. multaneously measure the “time of ar- is highly vulnerable. Solar ? ares and never given up on eLoran. Rather, since

Over time, Loran-A was replaced by Lo- rival” of signals from many stations other high-energy electromagnetic ? elds 2007 it has constructed transmitter sites ran-C, which provided both greater cov- in multiple chains. Using solid-state (natural or man-made) can temporarily and conducted at sea tests to determine erage and improved accuracy. As part of transmitters and atomic clocks, eLoran or permanently disrupt transmissions. the accuracy and robustness of the sys- the digital revolution, the Coast Guard in provides extremely precise timing. The Terrestrial or airborne transmitters can tem. In partnership with other European about 2000 began exploring the possibil- transmitters also provide a data channel jam or block reception of satellite sig- nations, there are now nine operational ity of developing an enhanced version of carrying correction and integrity mes- nals over wide areas. Due to the lower transmitters providing coverage for

In an effort to reduce the hemorrhag- eLoran receivers output latitude and lon- can be spoofed or fooled into accepting converted their Chayka radionavigation ing federal de? cit, the Administration’s gitude directly, eliminating the need for and utilizing bogus signals. system to broadcast a signal that is com-

Budget for 2010 proposed termination Loran-line charts. The Government Accountability Of- patible with eLoran. of the Loran program, using these terse The eLoran system operates in much ? ce (GAO) reported that there are sig- Only time will tell if the legislative words: “The Budget also supports the the same way as GPS or other global ni? cant concerns about the suf? ciency and executive branches of the federal termination of outdated systems such navigation satellite systems (GNSS), but of efforts of the critical infrastructure government have the political will to as the terrestrial-based long-range ra- as a complementary and independent sectors to mitigate the expected adverse move forward on this vital and long- dionavigation (LORAN-C) operated system. There are no failure modes in effects of GPS signal loss. Other stud- overdue initiative. The technology is by the U.S. Coast Guard resulting in an common with GNSS systems. Operat- ies have shown that the only reasonably readily available, but it will take deter- offset of $36 million in 2010 and $190 ing at signi? cantly higher power than available mitigation technology to ad- mination to move these ? rst tentative million over ? ve years.” Although only satellite-based systems, eLoran is much dress GPS signal loss is eLoran. steps to reality. Scarce monies will have the bean counters thought that this was a more dif? cult to jam or spoof. The federal government seems to be to be appropriated. Priorities will have good idea, the Department of Homeland Since at least 2004, studies have ? nally awaking from its self-induced to be rearranged. While the government

Security and the U.S. Coast Guard bit pointed out the nation’s (and indeed the slumber on this vital issue. On 23 March has imposed a number of resilience re- their respective tongues and went along, world’s) increasing reliance on GPS and 2015, the Department of Transportation quirements on the private sector, it has as did Congress. Thus, Loran-C was other GNSS for positioning, navigation, (DOT) published a notice seeking public omitted to take one important step of its terminated as was work on developing and timing (PNT). Surveyors, farmers, comments regarding potential plans by own. Movement is now being made to eLoran. and others rely on GPS to accomplish the government to implement eLoran as rectify that oversight.

Similar to Loran-A and Loran-C, many of their tasks. Modern transpor- a complementary PNT capability to GPS. In mythology, the phoenix is a long- eLoran is a low frequency terrestrial tation networks rely on GPS for their On 27 March, Representative John Ga- lived bird that is cyclically regenerated navigation system utilizing a number operation and safety. Modern commu- ramendi (D-CA) introduced the biparti- or reborn. A phoenix obtains new life by of transmission stations that emit pre- nication, ? nancial, and power networks san National Positioning, Navigation, arising from the ashes of its predeces- cisely timed and shaped radio pulses. In could not operate without the precise and Timing (PNT) Resilience and Secu- sor. The allusion ? ts the situation with eLoran, the pulses are centered at 100 timing provided by GPS. rity Act of 2015 (H.R. 1678). If enacted Loran. Loran-A gave birth to Loran-C. kHz. Each station emits a sequence of Of the 16 commercial sectors identi- into law, the bill would require the Sec- After its death, Loran-C may be about to eight pulses spaced 1000 microseconds ? ed as vital to the nation’s economy, se- retary of Defense, in coordination with give birth to eLoran.