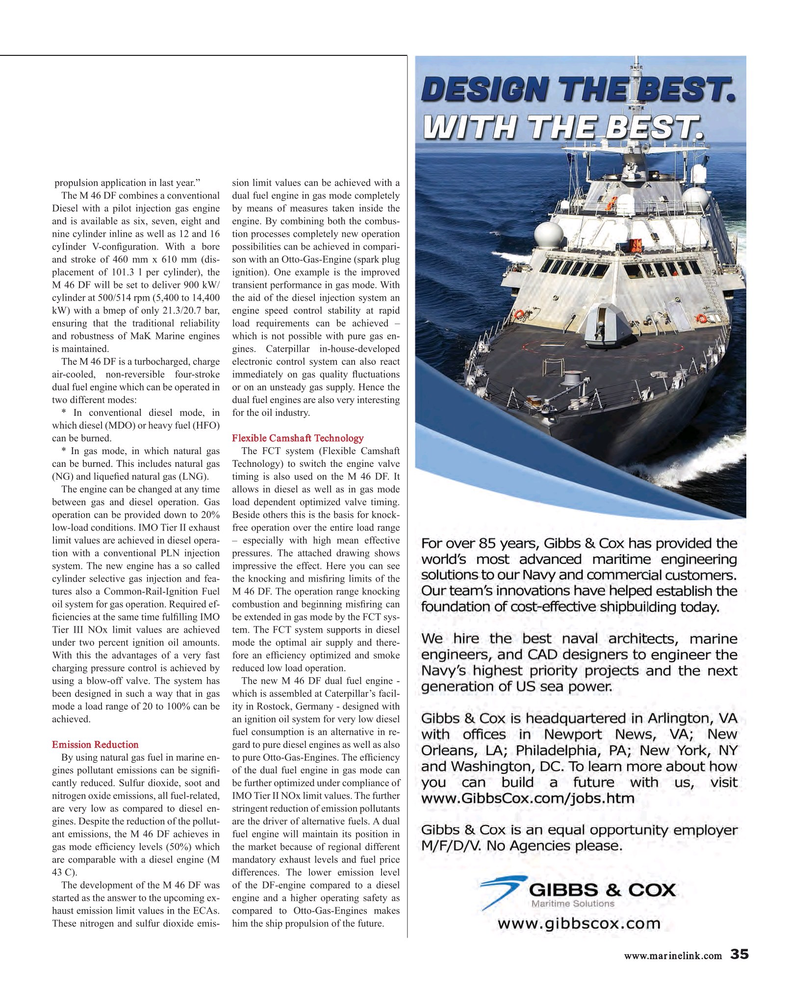 propulsion application in last year.” sion limit values can be achieved with a

Diesel with a pilot injection gas engine by means of measures taken inside the and is available as six, seven, eight and engine. By combining both the combus- nine cylinder inline as well as 12 and 16 tion processes completely new operation cyIinder V-con? guration. With a bore possibilities can be achieved in compari- and stroke of 460 mm x 610 mm (dis- son with an Otto-Gas-Engine (spark plug placement of 101.3 l per cylinder), the ignition). One example is the improved

M 46 DF will be set to deliver 900 kW/ transient performance in gas mode. With cylinder at 500/514 rpm (5,400 to 14,400 the aid of the diesel injection system an kW) with a bmep of only 21.3/20.7 bar, engine speed control stability at rapid ensuring that the traditional reliability load requirements can be achieved – and robustness of MaK Marine engines which is not possible with pure gas en- is maintained. gines. Caterpillar in-house-developed

The M 46 DF is a turbocharged, charge electronic control system can also react air-cooled, non-reversible four-stroke immediately on gas quality ? uctuations dual fuel engine which can be operated in or on an unsteady gas supply. Hence the two different modes: dual fuel engines are also very interesting * In conventional diesel mode, in for the oil industry.

The engine can be changed at any time allows in diesel as well as in gas mode between gas and diesel operation. Gas load dependent optimized valve timing. operation can be provided down to 20% Beside others this is the basis for knock- low-load conditions. IMO Tier II exhaust free operation over the entire load range limit values are achieved in diesel opera- – especially with high mean effective tion with a conventional PLN injection pressures. The attached drawing shows system. The new engine has a so called impressive the effect. Here you can see cylinder selective gas injection and fea- the knocking and mis? ring limits of the tures also a Common-Rail-Ignition Fuel M 46 DF. The operation range knocking oil system for gas operation. Required ef- combustion and beginning mis? ring can ? ciencies at the same time ful? lling IMO be extended in gas mode by the FCT sys-

With this the advantages of a very fast fore an ef? ciency optimized and smoke charging pressure control is achieved by reduced low load operation.

using a blow-off valve. The system has The new M 46 DF dual fuel engine - been designed in such a way that in gas which is assembled at Caterpillar’s facil- mode a load range of 20 to 100% can be ity in Rostock, Germany - designed with achieved. an ignition oil system for very low diesel fuel consumption is an alternative in re-

By using natural gas fuel in marine en- to pure Otto-Gas-Engines. The ef? ciency gines pollutant emissions can be signi? - of the dual fuel engine in gas mode can cantly reduced. Sulfur dioxide, soot and be further optimized under compliance of nitrogen oxide emissions, all fuel-related, IMO Tier II NOx limit values. The further are very low as compared to diesel en- stringent reduction of emission pollutants gines. Despite the reduction of the pollut- are the driver of alternative fuels. A dual ant emissions, the M 46 DF achieves in fuel engine will maintain its position in gas mode ef? ciency levels (50%) which the market because of regional different are comparable with a diesel engine (M mandatory exhaust levels and fuel price 43 C). differences. The lower emission level

The development of the M 46 DF was of the DF-engine compared to a diesel started as the answer to the upcoming ex- engine and a higher operating safety as haust emission limit values in the ECAs. compared to Otto-Gas-Engines makes

These nitrogen and sulfur dioxide emis- him the ship propulsion of the future.