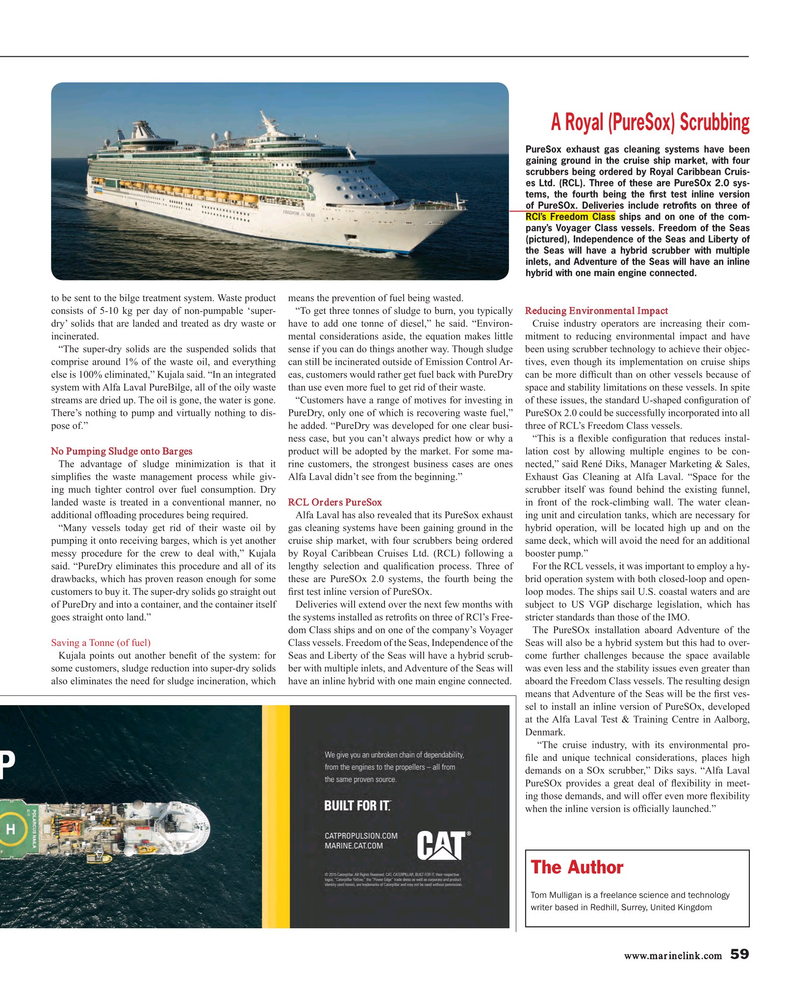 PureSox exhaust gas cleaning systems have been gaining ground in the cruise ship market, with four scrubbers being ordered by Royal Caribbean Cruis- es Ltd. (RCL). Three of these are PureSOx 2.0 sys- tems, the fourth being the ? rst test inline version of PureSOx. Deliveries include retro? ts on three of

consists of 5-10 kg per day of non-pumpable ‘super- “To get three tonnes of sludge to burn, you typically Reducing Environmental Impact dry’ solids that are landed and treated as dry waste or have to add one tonne of diesel,” he said. “Environ- Cruise industry operators are increasing their com- incinerated. mental considerations aside, the equation makes little mitment to reducing environmental impact and have “The super-dry solids are the suspended solids that sense if you can do things another way. Though sludge been using scrubber technology to achieve their objec- comprise around 1% of the waste oil, and everything can still be incinerated outside of Emission Control Ar- tives, even though its implementation on cruise ships else is 100% eliminated,” Kujala said. “In an integrated eas, customers would rather get fuel back with PureDry can be more dif? cult than on other vessels because of system with Alfa Laval PureBilge, all of the oily waste than use even more fuel to get rid of their waste. space and stability limitations on these vessels. In spite streams are dried up. The oil is gone, the water is gone. “Customers have a range of motives for investing in of these issues, the standard U-shaped con? guration of

There’s nothing to pump and virtually nothing to dis- PureDry, only one of which is recovering waste fuel,” PureSOx 2.0 could be successfully incorporated into all pose of.” he added. “PureDry was developed for one clear busi- three of RCL’s Freedom Class vessels.

ness case, but you can’t always predict how or why a “This is a ? exible con? guration that reduces instal-

No Pumping Sludge onto Barges product will be adopted by the market. For some ma- lation cost by allowing multiple engines to be con-

The advantage of sludge minimization is that it rine customers, the strongest business cases are ones nected,” said René Diks, Manager Marketing & Sales, simpli? es the waste management process while giv- Alfa Laval didn’t see from the beginning.” Exhaust Gas Cleaning at Alfa Laval. “Space for the ing much tighter control over fuel consumption. Dry scrubber itself was found behind the existing funnel, landed waste is treated in a conventional manner, no RCL Orders PureSox in front of the rock-climbing wall. The water clean- additional of? oading procedures being required. Alfa Laval has also revealed that its PureSox exhaust ing unit and circulation tanks, which are necessary for “Many vessels today get rid of their waste oil by gas cleaning systems have been gaining ground in the hybrid operation, will be located high up and on the pumping it onto receiving barges, which is yet another cruise ship market, with four scrubbers being ordered same deck, which will avoid the need for an additional messy procedure for the crew to deal with,” Kujala by Royal Caribbean Cruises Ltd. (RCL) following a booster pump.” said. “PureDry eliminates this procedure and all of its lengthy selection and quali? cation process. Three of For the RCL vessels, it was important to employ a hy- drawbacks, which has proven reason enough for some these are PureSOx 2.0 systems, the fourth being the brid operation system with both closed-loop and open- customers to buy it. The super-dry solids go straight out ? rst test inline version of PureSOx. loop modes. The ships sail U.S. coastal waters and are of PureDry and into a container, and the container itself Deliveries will extend over the next few months with subject to US VGP discharge legislation, which has goes straight onto land.” the systems installed as retro? ts on three of RCl’s Free- stricter standards than those of the IMO.

Saving a Tonne (of fuel) Class vessels. Freedom of the Seas, Independence of the Seas will also be a hybrid system but this had to over-

Kujala points out another bene? t of the system: for Seas and Liberty of the Seas will have a hybrid scrub- come further challenges because the space available some customers, sludge reduction into super-dry solids ber with multiple inlets, and Adventure of the Seas will was even less and the stability issues even greater than also eliminates the need for sludge incineration, which have an inline hybrid with one main engine connected. aboard the Freedom Class vessels. The resulting design means that Adventure of the Seas will be the ? rst ves- sel to install an inline version of PureSOx, developed at the Alfa Laval Test & Training Centre in Aalborg,

PureSOx provides a great deal of ? exibility in meet- ing those demands, and will offer even more ? exibility when the inline version is of? cially launched.”

Tom Mulligan is a freelance science and technology writer based in Redhill, Surrey, United Kingdom www.marinelink.com 59