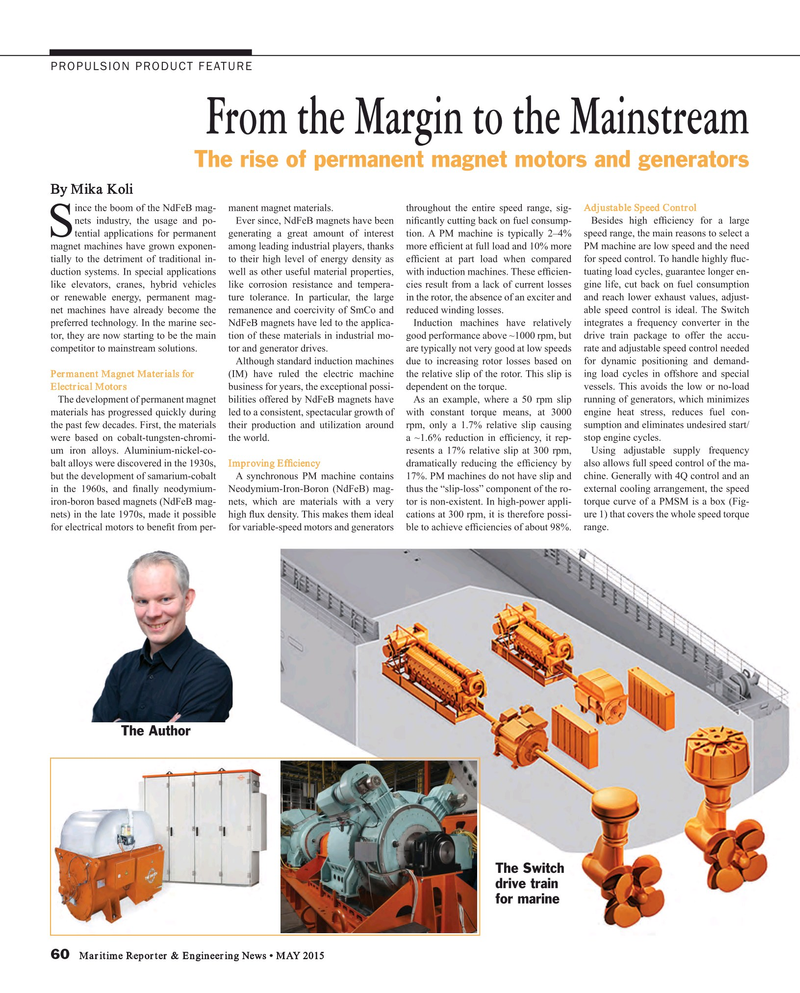 From the Margin to the Mainstream

The rise of permanent magnet motors and generators

By Mika Koli ince the boom of the NdFeB mag- manent magnet materials. throughout the entire speed range, sig- Adjustable Speed Control nets industry, the usage and po- Ever since, NdFeB magnets have been ni? cantly cutting back on fuel consump- Besides high ef? ciency for a large

Stential applications for permanent generating a great amount of interest tion. A PM machine is typically 2–4% speed range, the main reasons to select a magnet machines have grown exponen- among leading industrial players, thanks more ef? cient at full load and 10% more PM machine are low speed and the need tially to the detriment of traditional in- to their high level of energy density as ef? cient at part load when compared for speed control. To handle highly ? uc- duction systems. In special applications well as other useful material properties, with induction machines. These ef? cien- tuating load cycles, guarantee longer en- like elevators, cranes, hybrid vehicles like corrosion resistance and tempera- cies result from a lack of current losses gine life, cut back on fuel consumption or renewable energy, permanent mag- ture tolerance. In particular, the large in the rotor, the absence of an exciter and and reach lower exhaust values, adjust- net machines have already become the remanence and coercivity of SmCo and reduced winding losses. able speed control is ideal. The Switch preferred technology. In the marine sec- NdFeB magnets have led to the applica- Induction machines have relatively integrates a frequency converter in the tor, they are now starting to be the main tion of these materials in industrial mo- good performance above ~1000 rpm, but drive train package to offer the accu- competitor to mainstream solutions. tor and generator drives. are typically not very good at low speeds rate and adjustable speed control needed

Permanent Magnet Materials for (IM) have ruled the electric machine the relative slip of the rotor. This slip is ing load cycles in offshore and special

Electrical Motors business for years, the exceptional possi- dependent on the torque. vessels. This avoids the low or no-load

The development of permanent magnet bilities offered by NdFeB magnets have As an example, where a 50 rpm slip running of generators, which minimizes materials has progressed quickly during led to a consistent, spectacular growth of with constant torque means, at 3000 engine heat stress, reduces fuel con- the past few decades. First, the materials their production and utilization around rpm, only a 1.7% relative slip causing sumption and eliminates undesired start/ were based on cobalt-tungsten-chromi- the world. a ~1.6% reduction in ef? ciency, it rep- stop engine cycles.

um iron alloys. Aluminium-nickel-co- resents a 17% relative slip at 300 rpm, Using adjustable supply frequency balt alloys were discovered in the 1930s, Improving Ef? ciency dramatically reducing the ef? ciency by also allows full speed control of the ma- but the development of samarium-cobalt A synchronous PM machine contains 17%. PM machines do not have slip and chine. Generally with 4Q control and an in the 1960s, and ? nally neodymium- Neodymium-Iron-Boron (NdFeB) mag- thus the “slip-loss” component of the ro- external cooling arrangement, the speed iron-boron based magnets (NdFeB mag- nets, which are materials with a very tor is non-existent. In high-power appli- torque curve of a PMSM is a box (Fig- nets) in the late 1970s, made it possible high ? ux density. This makes them ideal cations at 300 rpm, it is therefore possi- ure 1) that covers the whole speed torque for electrical motors to bene? t from per- for variable-speed motors and generators ble to achieve ef? ciencies of about 98%. range.