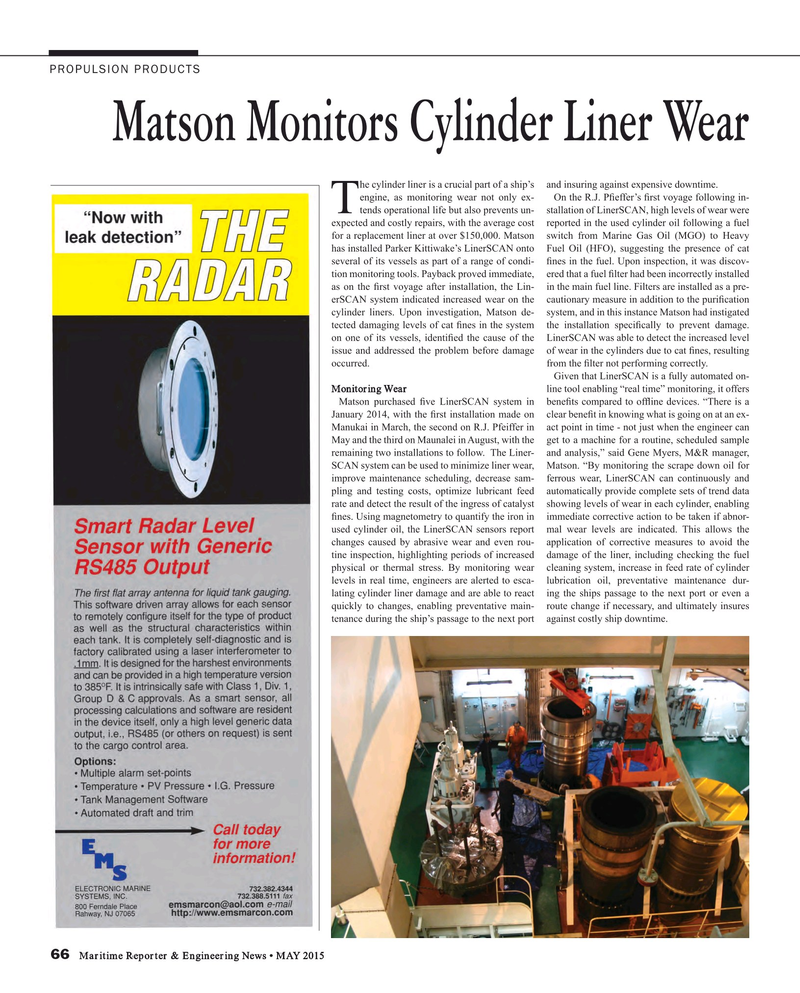 Matson Monitors Cylinder Liner Wear he cylinder liner is a crucial part of a ship’s and insuring against expensive downtime. engine, as monitoring wear not only ex- On the R.J. P? effer’s ? rst voyage following in-

Ttends operational life but also prevents un- stallation of LinerSCAN, high levels of wear were expected and costly repairs, with the average cost reported in the used cylinder oil following a fuel for a replacement liner at over $150,000. Matson switch from Marine Gas Oil (MGO) to Heavy has installed Parker Kittiwake’s LinerSCAN onto Fuel Oil (HFO), suggesting the presence of cat several of its vessels as part of a range of condi- ? nes in the fuel. Upon inspection, it was discov- tion monitoring tools. Payback proved immediate, ered that a fuel ? lter had been incorrectly installed as on the ? rst voyage after installation, the Lin- in the main fuel line. Filters are installed as a pre- erSCAN system indicated increased wear on the cautionary measure in addition to the puri? cation cylinder liners. Upon investigation, Matson de- system, and in this instance Matson had instigated tected damaging levels of cat ? nes in the system the installation speci? cally to prevent damage. on one of its vessels, identi? ed the cause of the LinerSCAN was able to detect the increased level issue and addressed the problem before damage of wear in the cylinders due to cat ? nes, resulting occurred. from the ? lter not performing correctly.

Given that LinerSCAN is a fully automated on-

Matson purchased ? ve LinerSCAN system in bene? ts compared to of? ine devices. “There is a

January 2014, with the ? rst installation made on clear bene? t in knowing what is going on at an ex-

Manukai in March, the second on R.J. Pfeiffer in act point in time - not just when the engineer can

May and the third on Maunalei in August, with the get to a machine for a routine, scheduled sample remaining two installations to follow. The Liner- and analysis,” said Gene Myers, M&R manager,

SCAN system can be used to minimize liner wear, Matson. “By monitoring the scrape down oil for improve maintenance scheduling, decrease sam- ferrous wear, LinerSCAN can continuously and pling and testing costs, optimize lubricant feed automatically provide complete sets of trend data rate and detect the result of the ingress of catalyst showing levels of wear in each cylinder, enabling ? nes. Using magnetometry to quantify the iron in immediate corrective action to be taken if abnor- used cylinder oil, the LinerSCAN sensors report mal wear levels are indicated. This allows the changes caused by abrasive wear and even rou- application of corrective measures to avoid the tine inspection, highlighting periods of increased damage of the liner, including checking the fuel physical or thermal stress. By monitoring wear cleaning system, increase in feed rate of cylinder levels in real time, engineers are alerted to esca- lubrication oil, preventative maintenance dur- lating cylinder liner damage and are able to react ing the ships passage to the next port or even a quickly to changes, enabling preventative main- route change if necessary, and ultimately insures tenance during the ship’s passage to the next port against costly ship downtime.